Annalisa Bollini: A Magical World of Embroidery and Illustration. Annalisa Bollini was born in Turin in 1984. After receiving a degree in History of Art she got a bachelor in Illustration studying in Turin (IED, European Institute of Design) and Milwaukee, (MIAD, Milwaukee Institute of Art and Design). Her first picture book as illustrator, “Histoires de fetes d’ici et d’ailleurs,” has been released in 2011 by Flies France Editions, Paris. She was a finalist in international competitions such as ILUSTRARTE (2012), CJ Picture Book Awards (2012) BOLOGNA CHILDREN'S BOOK FAIR (2016) and Society of Illustrators Annual Exhibition (2015). Her illustrations have been published in professional magazines like Dpi Magazine (Taiwan) and 3x3 Magazine (New York). Her first book as author and illustrator is “Qui a volé le savon?,” released on October 2015 in Paris by Gallimard Jeunesse. Nowadays she divides her time between illustrating and working in art therapy at nonprofit organizations, like the collective 620Gradifucsianauti, a group formed by one scenographer-actor, one body performer-actor and one screen print-etching artist. Embroidery’s popularity has been growing for the past few years. From traditional craft to political art, embroidery has metamorphosed as a sign of the times. It’s emergence as a new creative force encompasses not only new themes but to a new status: no longer domestic-decorative-female craft but an art form. This turn brings endless expressive possibilities. Annalisa Bollini’s needlework mixes illustration, collage and embroidery, creating a beautiful universe of whimsical animals and magical scenes. Here is what she tells us about her work and inspiration.

1. How did you start working with embroidery?

My mom really likes knitting and crochet and when I was a child she used to make sweaters for my twin sister, my big brother and me and she always tried to teach me knitting techniques, sharing that passion with me, but I wasn't interested because at that time I just wanted to draw. So one day she taught me the basic embroidery stitches, and I was able to make a drawing of a smurf, or something similar, with threads instead of pencils and I really loved it. That was my first embroidery work at 8 years old. Then for several years I stopped doing embroidery; it wasn’t until I was working on finding a personal illustration style that I remembered my love for that wonderful technique. So it came quite naturally, the mix between embroidery and collage, another passion of mine. Embroidery has been considered for many years a female craft and only the women learned and used that technique, but recently it started to attract also the attention of the male world and I'm sure this will open new ways to think it about it and to practice it. 3. Is embroidery a feminine craft?

I think there are neither female nor male artistic techniques and it's a big mistake to restrict a technique to a gender. It's an idea we need to break up with, because every technique has its own potentiality and its own specific language, you just need to make it yours, to make it the right way for you to express yourself, learn it and use it. No matter if you are a woman or a man.

I believe that everything can inspire you so it’s really important to be always curious and enthusiastic about the world that surrounds you. I often go to art exhibitions, to the cinema or to illustration festivals to know what's going on outside my little studio and to open my mind to others’ worlds. I also follow the work of several illustrators. I read a lot and I travel every time I can, but I think one of the most fundamental sources of inspiration is working with other creative people. Collaborations can enrich you and give you new ideas and inspiration. That's the reason I joined a multidisciplinary collective that works on different projects based on the direct interaction with the public in the urban space.

5. There's been a re-appropriation of embroidery, traditionally thought as a craft, to embroidery as art, what do you think about this?

I think it's possible to make art with every technique. It's not the technique that defines the product but yourself. I believe embroidery is starting to take its own place in the art world and I'm happy about that, not only because it's a great technique with a lot of unexpressed potentiality, but also because it's a fundamental tool to open our minds, to express ourselves in a different way, instead of limiting that expression to traditional conceptions. 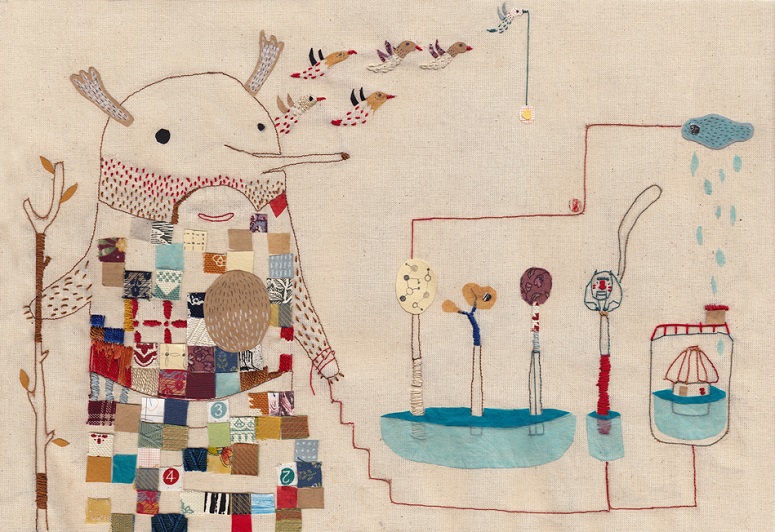